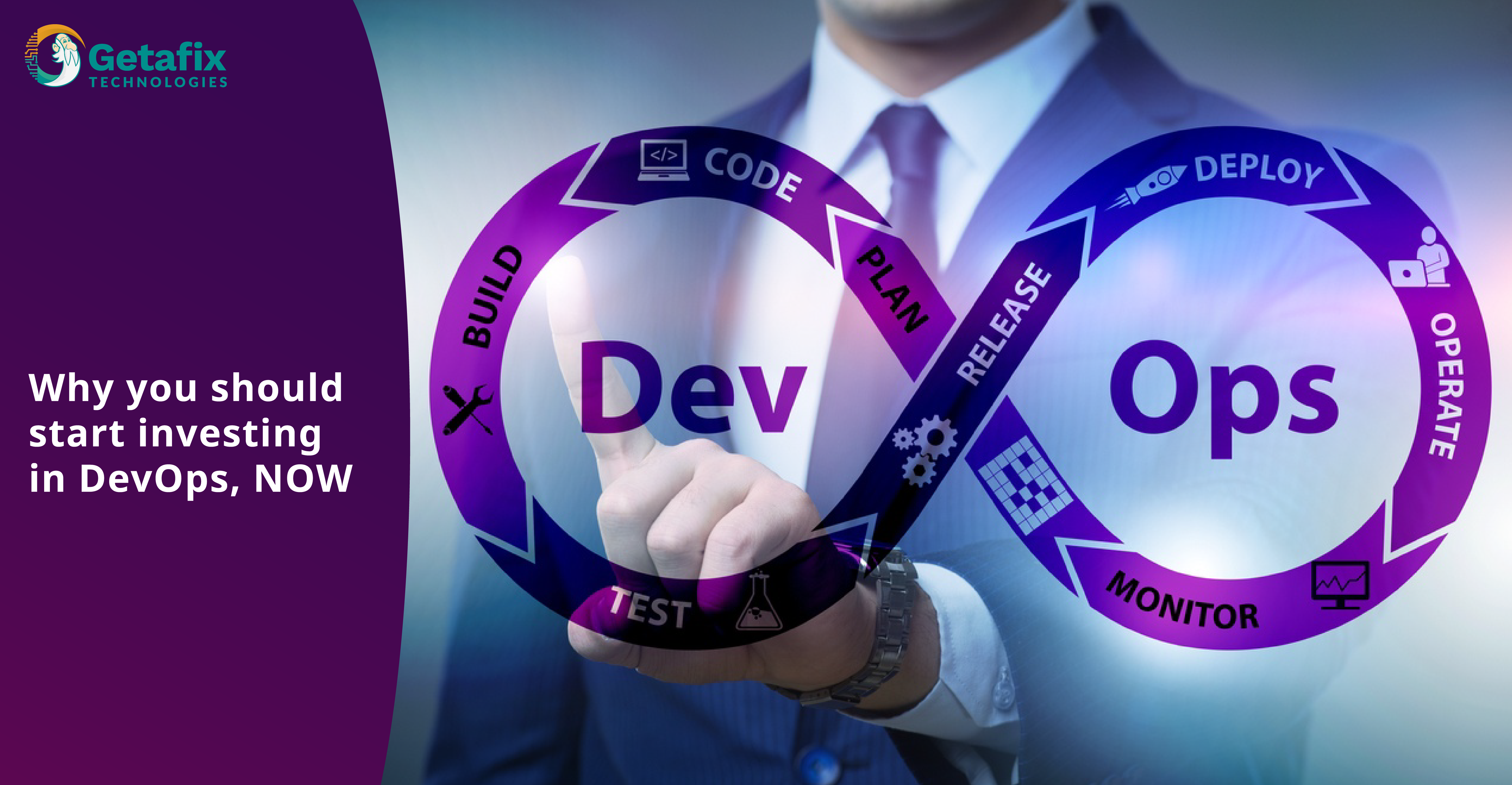 Why you should start investing in DevOps

Software is developing so quickly that it can be difficult to know what new trends are worth paying attention to. When you start considering Agile or DevOps, you have to bear in mind the significant investments you will have to make.

This is what makes the whole thing feel a lot more risky-  to suddenly change up what you’re currently doing.

However, while change can be scary, waiting around, hoping for the perfect time to get involved with DevOps isn’t the right solution.

The longer you wait to make investments, the longer it’ll take for you to catch up with competition.

In this blog, we will explore:

The word “DevOps” was coined in 2009 by Patrick Debois, who became one of its gurus.

The term was formed by combining “Development” and “Operations”.

DevOps is a term emerging from the collision of two major related trends:

The meaning of DevOps overtime has broadened to be an umbrella term for the processes, culture and mindset used to shorten the software development life cycle, using fast feedback loops to deliver features, fixes and updates more frequently and efficiently.

DevOps was not created or innovated with direct intent, but rather evolved and was nurtured by forward-thinking IT experts in a number of disciplines.

The two primary precursors of DevOps are:

Agile development: DevOps can be interpreted as a projection or outgrowth of Agile – agile software development establishes close collaboration of customers, product management, developers to fill in the gaps and rapidly iterate towards a better product.

DevOps recognises that service delivery and how the app and systems interact are a fundamental part to the client. In order to deliver exactly what a client wants – the product team has to include all concerns as a top level item.

Problems Led to the Creation of DevOps

Jez Humble proposed that DevOps is “a cross-disciplinary community of practice dedicated to the study of building, evolving and operating rapidly-changing resilient systems at scale.”

Very often, Developers and system administrators aren’t always on the same page and don’t always see eye to eye on a lot of things.

While on the one hand, business users demand change—new features, new services, new revenue streams—as fast as possible. At the same time, they also want a system that is perfect and free of all interruptions.

This creates a problem where companies feel like they have to choose between delivering changes quickly and dealing with an unstable production environment, or maintaining a stable but stale environment.

Developers are capable of churning out software as quickly as needed – but for the Operations team rapid change is basically suicidal, as making changes without any safeguards could possibly destabilize the system.

To try and overcome this very challenge, DevOps was created to integrate everyone associated with the software development into one single environment by creating a highly automated workflow with  a shared focus and goal.

How do these disparate groups join forces?

By subscribing to a common set of principles that transcends traditional discipline boundaries and roles, for example:

How Does DevOps “Work”?

Like all cultures, DevOps incorporates many variations on the theme. However, most observers would agree that the following capabilities are common to virtually all DevOps cultures: collaboration, automation, continuous integration, continuous delivery, continuous testing, continuous monitoring, and rapid remediation.

Good collaboration and working as a single unit is always far better than doing it alone. You are only as fast as your slowest – so if your teams like operations, IT, testing, product management and others have a disconnect instead of good communication – your end product isn’t exactly going to be great.

By getting cross-functional teams together on one page, you put an end to any blame game and get the job done on time.

DevOps requires the use of several tools to automate processes. While you may have the option to buy some, you may need to build some of these tools as well.

Nowadays, there are many open source tools you can leverage – and using these tools, DevOps automates large portions of software development as well as the deployment process.

It is easier to merge all your team’s work at the end of the day vs waiting till the end. If integrated continuously, errors and bugs can be fixed more immediately vs at the end. Which will inevitably lead to a waste of time and resources as all the different team’s will need to go back and correct any mistakes.

When it comes to DevOps, the quality of your code must be kept in mind by your developers. Developers cannot entirely depend on the Quality Assurance team (QA team) to check and report.

Instead, all teams must take responsibility. Your QA team can use various automated tools to help identify issues and report back on missed bugs and errors. This makes the whole testing cycle a lot faster.

By adopting the DevOps model, software development companies are simultaneously building, testing and preparing their product for a release through production.

When continuous delivery is implemented properly, developers will always have a deployment-ready build project that has passed through a standardized test process.

The main benefit of this is it helps identify root causes of issues quickly to proactively prevent outages and minimize user issues.

Like testing, monitoring starts in the development phase and there are two kinds of monitoring required for DevOps: server monitoring and application performance monitoring.

How will your team benefit from Embracing DevOps?

DevOps has something for everyone in the software chain: developers, operations, and testing. Furthermore, DevOps even touches the business side of the house: managers who monetize the software and executives who worry about the bottom line.

Automation is a big win for your programmers as you are basically paving a much clearer path for them to work. With no paperwork and lengthy approval cycles and no waiting for IT to provision a server, work is a lot easier.

When your developers can work in an environment as such, with the right resources in place, it results in more creativity and innovation as they have time to try multiple options, run different scenarios and test their code more thoroughly.

When developers first begin to work in a DevOps world, one revelation for many is understanding what goes on inside that black box labeled “Operations.” That knowledge helps developers work effectively with operations in a joint problem-solving mode.

A nightmare situation for the Ops team is a software release tanking within seconds of production deployment and the developers taking no responsibility for it. To make it worse – users outraged and the Ops team on the spot with no hindsight on what’s gone wrong and thus no quick, effective resolution.

So by incorporating your Ops teams into the world of DevOps – you help them sleep better at night.

Furthermore, automation in DevOps helps eliminate human errors common in manual operations, and has the added benefit of reducing the amount of time spent on routine tasks.

DevOps requires new ways to test software, which challenges test engineers to innovate. With automated provisioning, test engineers can provision a test environment that is virtually identical to the production environment, resulting in more accurate testing and better ability to predict the performance of new releases.

As with other groups, test engineer productivity increases thanks to automation and collaboration.

Though it may seem like DevOps applies to just your IT team – your Product Managers have several benefits too:

Product managers can leverage from the DevOps collaborative environment as they can get access to immediate feedback, review impact of new pricing and features – all this allowing them to test variations and gauge what works best for the customer.

DevOps has something for everyone in the software chain: developers, operations, and testing. Furthermore, DevOps even touches the business side of the house: managers who monetize the software and executives who worry about the bottom line.

Benefits of DevOps for you:

Improvements cited in a survey by Puppet Labs:

High-performing organizations spend 22% less time on unplanned work and rework. As a result, they are able to spend 29% more time on new work, such as new features or code.

High performers deployed multiple times per day, on-demand, compared to low performers who deployed between once per month and every 6 months.

Software development used to be a slow process and various teams were responsible for coding, testing and development. If there was an error or bug – it would take a whole lot of time to find it and patch it.

With the emergence of DevOps – all this has changed. Slow manual processes have been replaced by automation and you have all hands and teams on deck collaborating in a single environment as the software gets made.

DevOps is all about collaboration at all levels – coding, testing, release, monitoring and updates. It brings all teams together vs keeping it as a one man show.

The main advantage in DevOps is that the team members assume multiple roles to accomplish the job. Ultimately, this increases the efficiency of the organization and ensures a seamless user experience.

Since developers can write and patch the code simultaneously – the possibilities of bugs decrease considerably. Whether it’s the code, configuration, or the infrastructure; team members are aware of all the processes throughout the development cycle as they are working closely together.

DevOps incorporate infrastructure as code technique to monitor infrastructure configuration, thereby, eliminating the need for manual intervention. DevOps ensures adherence to compliance measures, such as PCI-DSS, by utilizing policy as code technique. There are predefined testing procedures and compliance measures integrated into the environment.

Though it may sound like a huge leap of faith, it is important to sit down with your team as your business expands and ask yourself when it is time for the investment. DevOps can optimise your business operations to new levels and help you deliver better to your customers.

If you are looking to outsource your DevOps and have a team of experts working for you – you can reach out to us and we will give you the best solution for your business!