Google App Store Statistics You Must Consider Before Building an App

Mobile apps are at the tip of our fingers and enable us to do just about anything. From learning a new language, entertainment, fitness and the list goes on. Known as Google Play today, was originally launched in October 2008 under the name Android Market.

Google Play generated the largest amount of worldwide app downloads, in the first quarter of 2020, users downloaded 24.3 billion apps from Google Play. With rising trends in apps and their functions to make daily life easier, by 2023, mobile apps are projected to generate over 9935 billion U.S. dollars through paid downloads and in-app advertising.

Google Play presents an immense opportunity for both users and developers for engaging deeply with brands for achieving business goals.

Here are some thing you should consider before building an app:

Google play store is considered as one of the most trusted platforms with millions of users visiting it every day. The number of available apps in the Google Play Store was most recently placed at 2.96 million apps, after surpassing 1 million apps in July 2013.

The demand for mobile apps has constant growth with application to solve and support day to day activities.

The number of new Android app releases in the Google Play store per month as of August 2020. During the last measured month was approximately 111 thousand mobile apps released through the Google Play Store.

The rating system on the Play Store makes the market for apps a more competitive platform. Users can use the app, rate it and leave a review for both the developer to preview and give other users an insight into the functionality or usefulness of the app. Ratings on an app, help users make the right decision about it.

The number of installs from the Google Play Store in the first half of 2019 was reported to be 84.3 billion vs 6.7 billion downloads in 2017.

Some of the most popular apps downloaded include: Facebook, WhatsApp, and Messenger.

The play store includes both paid and free apps. So you may wonder if you are building an app and are making an investment to build one – how do you generate revenue from it?

A great example to look at would be – PlayerUnknown’s Battlegrounds (PUBG) which is an online multiplayer battle royale game. While the game is free to download on the Play Store but offers a wide variety of in-app purchases.

A report states that the game earned its creators over $226 million (roughly Rs. 1.7 thousand crore) in user spending, making it the highest grossing game in the world for May.

App downloads vary based on Age, Category and country.

Depends upon the solutions that the app is offering. The young generation (millennials) tend to spend more time using a mobile application.

Difference in the age group between young, middle, and older generations and app usage lies in the interest and requirement of technology in the everyday lifestyle

The popularity and demand of a particular app depends on the country and also economic circumstances. For example – the top four most downloaded apps in India as of 10 April are TikTok (14.1 million), government’s Covid-19 tracking app Aarogya Setu (13.4 million), gaming app Ludo King (9.5 million) and an app that provides video statuses for WhatsApp called UVideo (8.6 million).

In general, the chart below gives an overview of top popular categories. 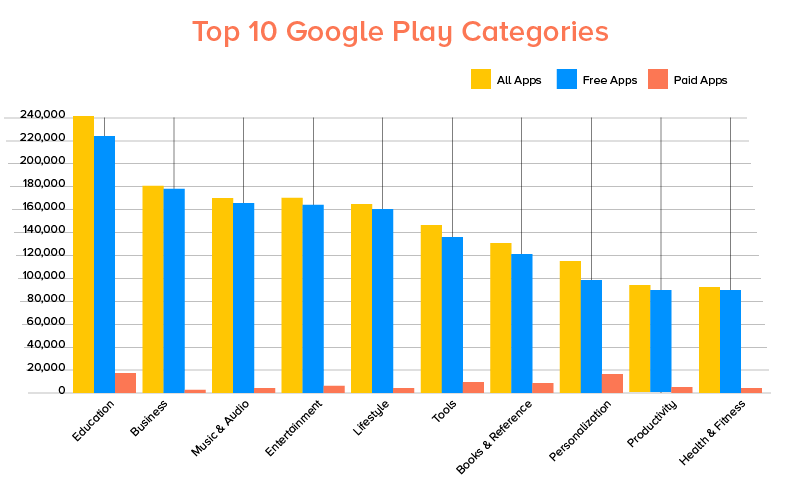 From a report by Sensor Tower,  iOS App Store and Google Play combined produced $39.7 billion in worldwide app revenue, just in the first half of 2019 — and that’s up 15.4% over the $34.4 billion of what was made during the first half of last year.

Google Play Store statistics are ranking way better than any other app store and also offering a wide range of solutions to people at the tip of their fingertips.

Even in this pandemic situation, the rise in the number of downloads can be seen due to many reasons. People exploring remote tools, at home fitness apps, news updated etc.

This shows it is the right time to get started with Android application development. By investing in Android application development, offering solutions that solve for various target audiences in any situation will give your business an edge and make it more accessible and make your brand more visible.
If you are looking for an opportunity – this is it. Read more how to make your app more visible to engage with a larger audience here and make your app rank.